Home/News/ICTU calls for mandatory sick pay for all workers

The Irish Congress of Trade Unions is calling on politicians in all parties and none to make sick pay mandatory for all workers within the lifetime of this Government.

Speaking ahead of the publication of the quick guide to sick pay, ICTU General Secretary Patricia King said: “It took a pandemic to expose the big failings in how we protect workers against loss of income, the lack of a legal entitlement to sick pay from an employer being one of the most glaring examples.”

Ms. King added: “Ireland is completely out of line with European norms in not requiring employers to continue to pay a worker’s wage if sick and unable to work for a period of time.

“In the club of high-income European countries, of which Ireland is a member, the guaranteed period of paid sick leave is for no less than two weeks and typically paid at 100% the worker’s wage, with one exception.

“Workers in Ireland have no legal right to sick pay. Sick pay is at the discretion of the employer to include or not in a contract of employment. As a result, up to half of the labour force, including hundreds of thousands of low-paid essential workers, don’t receive sick pay and face being financially compelled to keep on working when sick” she said.

ICTU Social Policy Officer, Dr Laura Bambrick said: “Ensuring workers are well at work is a basic issue of safety and simply the right thing to do. When workers are unwell they need to rest to recover. When sick workers stay home they reduce the spread of infection and the risk of workplace accidents; they keep us all safe.”

Dr. Bambrick said: “Our voluntary system of sick pay isn’t working. The welfare system was built out of the ruins of World War II. It shouldn’t be beyond the wit of today’s politicians to introduce mandatory sick pay as a lasting legacy of the pandemic.”

On Monday, ICTU publishes its quick guide to sick pay – Sickening! The State of Sick Pay in Ireland and is contacting all Oireachtas members to call on them to legislate to guarantee all workers an entitlement to sick pay, bringing Ireland in line with workers’ rights in the rest of Europe. 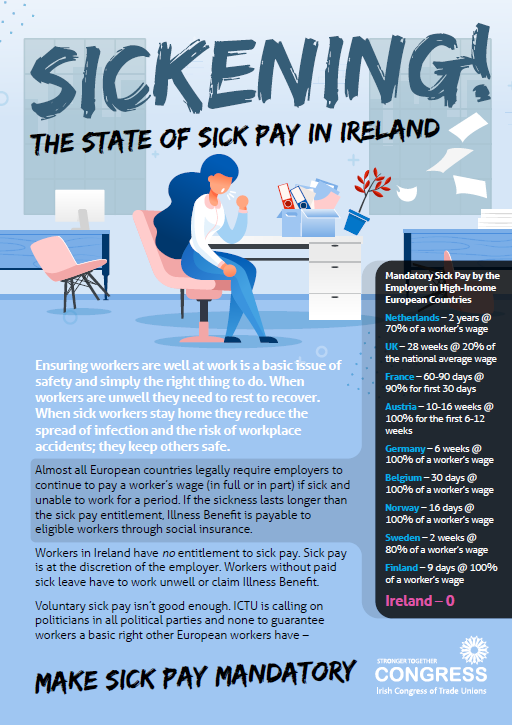